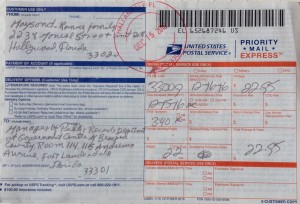 We the maysonet-ramirez family are bringing to your awareness of the possibilities of some FORMER agents, of which you are counterpart of, involved in the criminals’ activities of DEED FRAUD, and disguising as lawful government of our Continental Republic.

UNDER any circumstances is the property of 2238 monroe street, unit 208 in hollywood florida for sale, and or is on foreclosure, or have a pending loan, NOR is Lucia Maysonet, or Lucy Maysonet the owners of said property even if in front of your eyes, and according to your corporate deceptions and assumptions it does say both of those entities named are the owners of property, NOR are MAYSONET, LUCIA, OR MAYSONET, LUCY the owners of property, or last, ALMA HF TRUST, that according to the dissolving of all corporations, including yours, is no longer active on a larger scale, nor does Alma hf Trust want to be part of your very owned, and former sunbiz corporation in the STATE OF FLORIDA, and second Alma hf trust does not own the title of the property of the address it represents do to the fact of sale of property by its owner(s) under common and natural law, as it is on the records, and as we, out of our own free will choice decided to records on your very own private corporation(s) of Broward County Public Records, that you so deceivingly, and throughout the years have been disguising as representatives of the American people when in reality you are just private corporation(s) that only interests has been yours all along, and with the larger minions, such as the former, corporate, and private courtroom system, and former agents as, esquires/attorneys, and corporate police, to name a few. It has been the larger commercial war crimes against our very own innocent American people with crimes committed of, subjugation, subordination, racketeering, money laundering, fraud, extortion, human trafficking, involuntary servitude, high treason, and crimes against humanity.

The Certificate of sale, and title of property is recorded on your corporation of public records of, here: INSTR# 113784797; 113784782, and published worldwide here: http://wetheonepeople.com/certificate-of-sale/, and here: http://wetheonepeople.com/title-transferred-of-property-without-prejudice/, which come to think, you do not display the owners of property on the open view of your website under common law, because it is obvious; it is not of your own interest, however you show alma hf trust with no problem do to the fact that it is within your jurisdiction by means of assumption. AND what assumption? We paid you to use your service, and under any circumstances you should violate it without the written, and wet-ink pen signature of its owner(s), and or with a lawful contract between two people (the owner/s, and second party, and NOT between a corporation(s) as that of yours- NOT to violate it through the infringements, usurpations, assumptions, extortions, violation, invasion, and subordinations of your agents, and yourselves.

WITH this being said, under any circumstances you will not alter/remove/change, record, and or grant a Deed of transferred of property to anyone through your privately recording scheme, and fraud to any known or unknown person, entity(s) that may/are, or may not be a member of your former corporation within broward county, and or the entire state of florida without the written, and signed wet-ink pen signature of authority of its previous owner(s). ALMA HF TRUST, which is a dormant entity it is not to be removed from the address of property it represents, not now or future, and without prejudice. Furthermore, we want you to put/records this documentation within your records department under the names of Lucia maysonet, Lucy Maysonet, and Alma hf Trust for the entire world to see it, and NOT to be hidden/alter (as you knowingly and deliberately do when it is not of your conveniences, and as you had the audacity to have done too many times of our personal filings, and after we have paid to you for the service in the past), so it would not be any present or future misunderstanding by anyone within your former department of records. Thank you very much.

Description of Personal Private Property with All Right Reserve:

unit 208, monroe of hollywood condominium apartments, a condominium, according to the declaration of condominium thereof, recorded in official records book 4003, Page 242, in the public records at broward county. PROPERTY Address, 2238, monroe street, unit 208, hollywood florida [33020], et al… with all Right Reserve, and without prejudice.

ANYONE COMMITTING an unauthorized transferred of property with regards to our private property is committing a crime of DEED FRAUD, that it is a serious crime, and the perpetrators, and counterpart are bound, and pursuant to U.S. Title 18 & 1341, & 1342, and the Constitution FOR the united States for America can be/call for 20 years in prison, a fined or both, or death penalty to anyone that is harming the lives, and or taking the lawful rights of any American citizen; uses fictitious names, solicitation, pretentious title of authority, conspiracy against rights, semantic deceit, and deprivation of rights under color of law; and U.S. Code & 1951 (a) Whoever in any way or degree obstructs, delays, or affects commerce or the movement of any article or commodity in commerce, by robbery or extortion or attempts or conspires so to do, or commits or threatens physical violence to any person or property in furtherance of a plan or purpose to do anything in violation of this section shall be fined under this title, a million dollar, or imprisoned not more than twenty years, or both.(b) As used in this section—(1) The term “robbery” means the unlawful taking or obtaining of personal property from the person or in the presence of another, against his will, by means of actual or threatened force, or violence, or fear of injury, immediate or future, to his person or property, or property in his custody or possession, or the person or property of a relative or member of his family or of anyone in his company at the time of the taking or obtaining. (2) The term “extortion” means the obtaining of private property from another, with his consent, induced by wrongful use of actual or threatened force, violence, or fear, or under color of official right, or pretentious representation…Such as the crimes that the former BAR, and the defunct private Corporate Courtroom system are inflicting to our people. Furthermore, and as fact by the universal law set by the OPPT, By Military ORDER… “To arrests and take into custody any and all certain states body, their agents, officers, and other actors, regardless of domicil by choice, owning, operating, aiding and abetting private money system, issuing, collecting, legal enforcement system, operating SLAVERY SYSTEMS against the several states citizens… to immediately repossess all private money systems, tracking, transferring, issuing, collection, legal enforcement systems operating slavery system… Closed their offices…, and pursuant to Commercial Bill of UCC Doc. No. 2012114586, and True Bill of UCC No. 2012114776″, as commanded by national and international law, and the United States-Statute -at Large.

WE HOLD that the American People have God given unalienable rights as stated in the Declaration of Independence which are reserved exclusively in the Bill of Rights. That no government has any authority to remove, restrict or infringe any of those rights. The Republic is not part of the unlawfully chartered and now dissolved UNITED STATES/INC municipal Corporation, its former agents, esquires/attorneys, police, paid for hire…, or any of its sub-corporations, either directly or indirectly. This includes any of its political parties.

ABSENT our knowing, willing and intentional express consent, you are ordered to cease and desist from committing trespass on our domicil of mind and body, our mind and body domicil by choice, our private land and our property, inclusive of any and all direct or indirect contact.

SWORN as true and correct, executed on this 15th day of December, 2016 with all rights reserved including the rights to make final determination of all definitions and intent stated herein.

Authorized representatives all rights reserve, and pursuant to the Constitution FOR the United States of America, Article 4, Section 3, Clause 1, governed and insured by public policy UCC 1-103, and UCC 1-308 thereof. 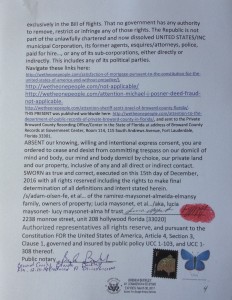