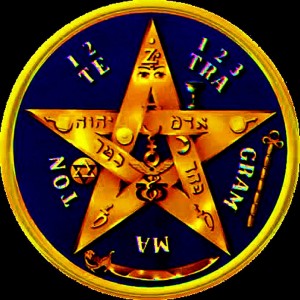 Symbolic meaning of the pentagram

The Pentagram is a symbol of a star encased in a circle. Always with 5 points (one pointing upward), each has its own meaning. The upward point of the star is representative of the spirit. The other four points all represent an element; earth, air, fire, and water. All these things contribute to life and are a part of each of us.

To wear a pentagram necklace or other form of jewelry, is to say you feel the connection with the elements and respect the earth.

The number 5 has always been regarded as mystical and magical, yet essentially ‘human’. We have five fingers/toes on each limb extremity.We commonly note five senses – sight, hearing, smell, touch and taste. We perceive five stages or initiations in our lives – eg. birth, adolescence, coitus, parenthood and death. (There are other numbers / initiations / stages / attributions).

The number 5 is associated with Mars. It signifies severity, conflict and harmony through conflict. In Christianity, five were the wounds of Christ on the cross. There are five pillars of the Muslim faith and five daily times of prayer.

Five were the virtues of the medieval knight – generosity, courtesy, chastity, chivalry and piety as symbolised in the pentagram device of Sir Gawain. The Wiccan Kiss is Fivefold – feet, knees, womb, breasts, lips – Blessed be.

The number 5 is prime. The simplest star – the pentagram – requires five lines to draw and it is unicursal; it is a continuous loop.

Expressing the saying Every man and every woman is a star, we can juxtapose Man on a pentagram with head and four limbs at the points and the genitalia exactly central. This is Man in microcosm, symbolising our place in the Macrocosm or universe and the Hermetic / Tantric philosophy of associativity as above, so below. 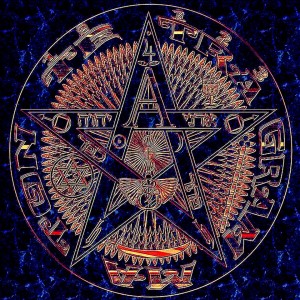 The geometric proportions of the regular pentagram are those of the Golden Section. The Golden Proportion is one beloved of artists since Renaissance times and also to be found in post-Hellenic art and in the geomantic planning of Templar sites, being those proportions of a rectangle considered most pleasing to the eye. Here, the ratio of the lengths of the two sides is equal to the ratio of the longer side to the sum of the two sides. Or :

This ratio forms the foundation of the Fibonacci series of numbers 1, 1, 2, 3, 5, 8, 13, 21, 34, 55, 89, 144, etc. where each number is formed by adding the previous two numbers. The Fibonacci series is much found in nature in the pattern arrangement of flower heads and leaves and many flower heads and fruits themselves exhibit a fivefold symmetry.

The pentagram has long been believed to be a potent protection against evil, a symbol of conflict that shields the wearer and the home. The pentagram has five spiked wards and a womb shaped defensive, protective pentagon at the centre.

Here are five elements, four of matter (earth, air, fire and water) and THE quintessential – spirit. These may be arrayed around the pentagrams points. The word quintessential derives from this fifth element – the spirit. Tracing a path around the pentagram, the elements are placed in order of density – spirit (or aether). fire, air, water, earth. Earth and fire are basal, fixed; air and water are free, flowing.

The single point upwards signifies the spirit ruling matter (mind ruling limbs); is a symbol of rightness. With two points up and one (spirit) downwards, subservient, the emphasis is on the carnal nature of Man. 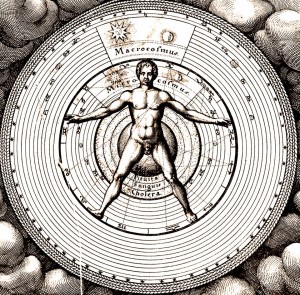 A pentagram may be open, without a surrounding circle.This is the active form symbolising an outgoing of oneself, prepared for conflict, aware, active. (One wearing an open pentagram must be physically aware of the danger of sharp points sticking in their skin from time to time). As a pagan religious symbol, the open pentagram represents an open, active approach.

A circle around a pentagram contains and protects. The circle symbolises eternity and infinity, the cycles of life and nature. The circle touching all 5 points indicates that the spirit, earth, air, water and fire are all connected.

The circled pentagram is the passive form implying spiritual containment of the magic circle, in keeping with the traditional secrecy of witchcraft, and the personal, individual nature of the pagan religious path, of its non-proselytising character.

The pentagram may be inverted with one point down. The implication is of spirit subservient to matter, of man subservient to his carnal desires. The inverted pentagram has come to be seen by many pagans as representing the dark side and it is abhored as an evil symbol. Fundamental christians, indeed, see any form of pentagram as such. However, these are recent developments and the inverted pentagram is the symbol of Gardnerian second degree initiation, representing the need of the witch to learn to face the darkness within so that it may not later rise up to take control. The centre of a pentagram implies a sixth formative element – love/will which controls from within, ruling matter and spirit by Will and the controlled magickal direction of sexual energies. This is another lesson of initiation.

The Pentagram As A Christian Symbol

Up until medieval times, the five points of the pentagram represented the five wounds of Christ on the Cross. It was a symbol of Christ the Saviour. This is in stark contrast to today where the pentagram is criticized by modern Fundamentalist Christians, as being a symbol of evil.

The church eventually chose the cross as a more significant symbol for Christianity, and the use of the pentagram as a Christian symbol gradually ceased.
…