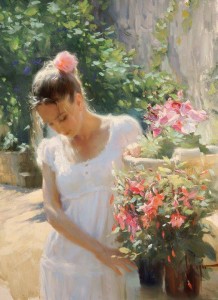 “The glory of gardening: hands in the dirt, head in the sun, heart with nature. To nurture a garden is to feed not just the body, but the soul.” – Alfred Austin

Gardeners have been knowing for centuries that their pastime gives them joy and peace. Many people will say that gardening is stress therapy. There is even a group called the American Horticultural Therapy Association “committed to promoting and developing the practice of horticultural therapy as a unique and dynamic human service modality.”

As with so many things, science introduces us to the physical wonders behind what we already know on a subliminal level. There are two interesting pieces of research that give credence to the feeling that our bodies and souls are better off from gardening.

So basically, the things we do as gardeners—working the soil, planting, mulching, and so forth—can really contribute to happiness. We ingest the bacteria by breathing or through broken skin. The simple act of children playing outside in the grass and dirt can be a natural way for them to reduce anxiety.

In addition to increasing happiness and reducing anxiety, serotonin has positive effects on memory and learning. Research presented at the American Society for Microbiology shows that feeding live M. vaccae bacteria to mice significantly improved their ability to navigate mazes, due to the fact that the bacteria triggers the release of brain serotonin. It appears that this bacterium plays a role in learning in mammals.

Have you noticed that you feel really happy when picking those ripe vegetables, especially that first tomato of the season? Well, it turns out that harvesting fruits and vegetables triggers the release of dopamine in the brain. It is speculated that this evolved over 200,000 years of humans harvesting food as hunter-gatherers. Dopamine is strongly correlated with reward-motivated behavior.

So there we have it, two physical reasons why people can be happier and smarter through gardening. I suspect there are several other other reasons contributing to this, including the myriad of colors in plants and animals, trees swaying in the wind, birds singing, squirrels chattering, lady beetles, and fresh air. Perhaps one day we’ll have scientific explanations for all this, but in the meantime we can take comfort in our innate feelings.